Review: Nobody Sleeps in the Woods Tonight 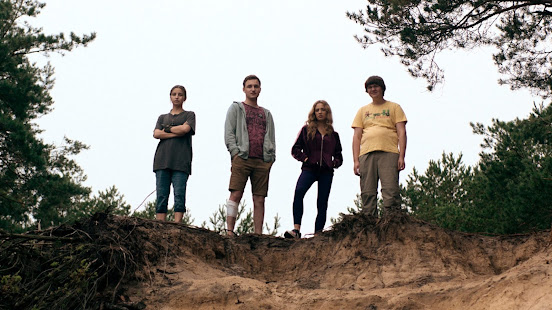 Just in case you thought Americans were the only ones who make backwoods slasher movies, along comes the Polish effort Nobody Sleeps in the Woods Tonight to prove us all wrong.

And, for the most part, they do a pretty good job of it too. We get a solid backstory, some decent kills, ample gore, and that which is lacking in most horror movies these day -- sex and Female Chest Nudity!

The story follows a group of technology-dependent youth who go to an offline camp and face a sinister danger lurking in the woods. That danger is a pair of deformed killers who delight in stabbing, smashing and ripping our teenagers limb from limb.

Nothing too original here, other than the killers' backstory, which I won't spoil. And the offline camp idea is really just a modern spin on the traditional summer camp. So don't expect any social commentary or hidden agenda... even with a gay character included among the ranks.

But we do get lots of what we're here to see, as I stated already. Nobody Sleeps in the Woods Tonight is a bit long, given the kind of movie it is, and it's not really scary. So I'm gonna give it a Bad. Had it been more streamlined, and offered a few chills on top of the body count, it would've been better.