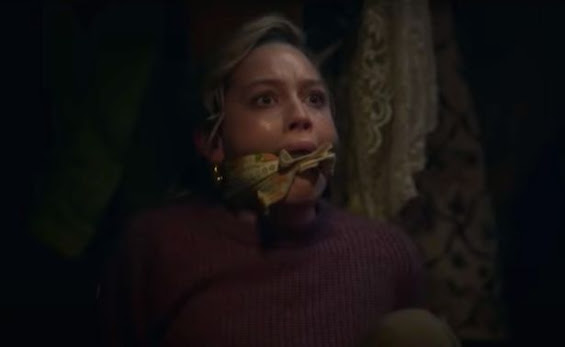 I loved Mike Flanagan's reimagining of The Haunting of Hill House when it hit Netflix two years ago. It was a great -- and often downright scary -- series that used Shirley Jackson's classic novel as the springboard for something unique among horror television.

No, I'm not going to explain it all again. But you can re-read my review right here.

Now Flanagan, and much of the Hill House cast, are back with a follow up, this time pulling heavily from Henry James's The Turn of the Screw to tell a new story with a new roster of characters. Does magic strike twice?

Yes and no. For one, everyone is so good here, especially Victoria Pedretti. She had a small role in Hill House, but is front and centre this time, and highly likable and engaging. Most of what goes on at Bly Manor is seen through her eyes, and she owns it. So yeah, great cast and acting!

The production design and filmmaking are also spot on. Hill House was a moody and atmospheric affair, and so is Bly Manor. And yes, there's plenty of ghosts in the background, so once again it's worth keeping your peepers glued to the screen for them.

Writing? Again, top notch. This is a twisty, turny puzzle box of a series that must be unraveled to be fully enjoyed. So one is compelled to keep watching in order to figure out everything that's going on. And there's a lot to be said here about grief and identity. No shortage of material to devour.

If there's one flaw -- and it's a big one for me -- it's that Bly Manor just isn't scary. Sure, there's a few moments here and there, but Hill House was genuinely frightening all the way through. I get that Flanagan and company were trying something different, but still. This is a horror show. So you gotta be scary, and Bly Manor just isn't.

The lack of scares did hurt my watch of The Haunting of Bly Manor. I'll keep watching future seasons of Flanagan's anthology for sure, but I wasn't spooked out enough to sit through the nine episodes again. That makes it a Bad for me.