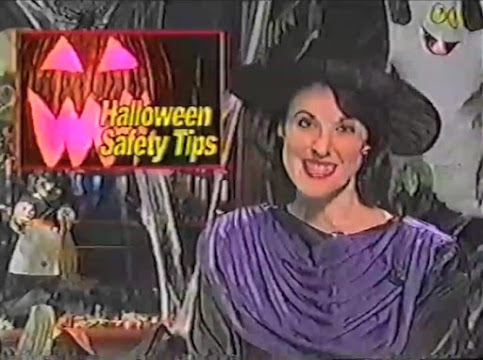 File this one under WTF! I stumbled across WNUF Halloween Special while browsing through Shudder late one night, which is probably the best time to watch this curiosity piece of a movie... or should I say "movie?"

Presented as a Halloween night local news broadcast in 1987, WNUF Halloween Special follows a TV news personality as he leads a team of paranormal investigators and an exorcist into an abandoned home with a notorious past. The broadcast has the look, feel and commercials those of us who grew up during the 80s, and watched this kind of thing, would expect. And, on a nostalgia level, this is pretty entertaining stuff.

The film's six directors shot this on vintage tape stock, so WNUF Halloween Special looks like it was pulled from the era. And they captured the tone of those smaller market news casts, commercials, and production values perfectly, while poking gentle fun at them as well.

Is WNUF Halloween Special (I just liking writing that out) scary? No. And it does overstay its welcome despite the short running time. There's only so much of this kind of thing one can take. Remember how frustrating commercials could be, especially when the broadcast kept cutting to them at crucial times? Yeah, me too. I get that was part of the joke, but it did start to piss me off.

WNUF Halloween Special is worth watching once for the kitsch factor, and to be reminded of simpler times. But I'm not sitting through it again, so it's a Bad.