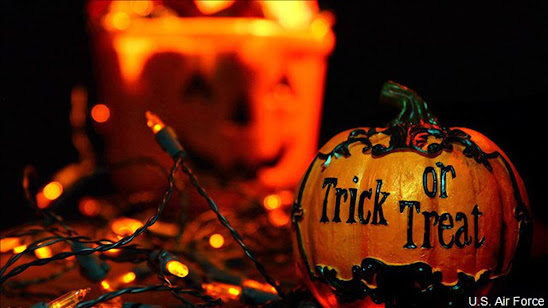 It's a time when The Basement brings you "Halloween Day by Day"!

That's right, we're back for a FULL MONTH of horror related news and reviews!  The gang has some great treats for you... and maybe a trick up their sleeves.

What sort of stuff do we have to offer this year?  Well- let's reach into the candy bowl, and find out:

Mike S will be bringing you horror book reviews every Tuesday, and comic reviews on Saturdays.  Mondays will see him counting out some of his "Top Five Lists", while checking out "The Omen" movies on Wednesdays.  Friday's is "tip and sip time" as he kicks back and samples some horror and October themed brews.  And don't worry - he hasn't forgotten Sundays and Thursdays!  You can expect a wide range of horror movies to be reviewed by him on those days!  So, make sure you check here DAILY to see what's new!

But!  There's more goodies to be had.  Jay and Marcus Flor will be popping in as well with their own spooky offerings!  They've been locked up in their mad science labs concocting strange potions and conducting unnatural experiments that they'll be revealing this month!

And!  That's right- there's an AND!  If scheduling permits, Mike S might also be able to hijack our Twitter account in order to do another 24 hour horror movie tweet along!  Stay tuned for more on that as "Halloween Day by Day" progresses!

Woooo!  It's a scare packed month ahead, and we invite you to join us for the party!