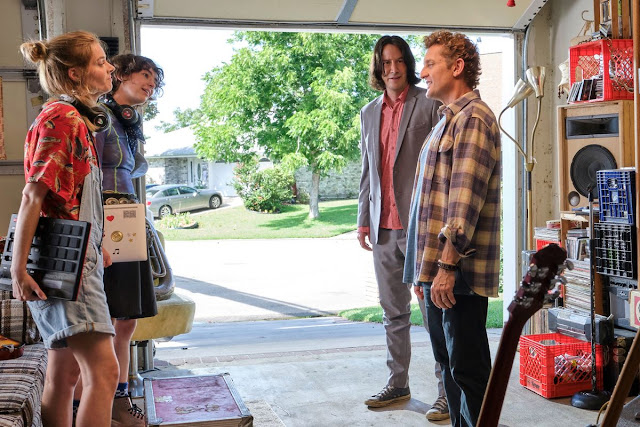 I'm not sure we really needed another Bill & Ted movie, given the last effort came out in 1991. I'm thinking the only reason we got one is because of the world's current love affair with Keanu Reeves. And hey, he seems like an awesome dude, so why not.

It's funny how Reeves was so associated with Ted that it took a good, long time for moviegoers to embrace him in any other kind of role. Now that he's created another iconic character, John Wick, I found it hard to accept him as Ted... who is about the furthest thing from Wick as you can get.

And it took a while for me to accept this new Bill & Ted movie too... like at least a half hour to 40 minutes. There are few laughs up until then, and the film's goofy charm had to work overtime to win me over. But once Bill & Ted start travelling into the future to find a song that will unite mankind and prevent the collapse of all time, and their daughters (well played by Samara Weaving and Brigette Lundy-Paine) start travelling back in time to put together a band of legendary musicians to back their father's up, then Bill & Ted Face the Music won me over.

Oh, and there's a killer robot named Dennis that's after all of them. Yup, Dennis.

When this movie is funny, it's really funny. Especially when Death -- once again played by the great William Sadler -- returns during the final act. He pretty much steals the movie. As does Dennis. And things end strongly with an upbeat finale and positive message about the power of music and living your dreams.

As much as I ended up liking Bill & Ted Face the Music, I'm not sure I'll watch it again. Which means it's a Bad. But it introduced my son to the music of Louis Armstrong and Jimi Hendrix, which he's now listening to, and that's a Good thing!