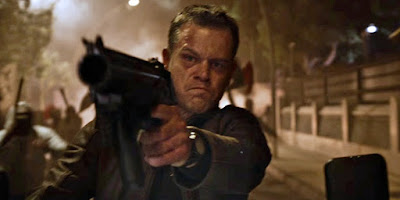 Fifty-six per cent on Rotten Tomatoes. That's it. Only 56 per cent of lamestream critics liked the new Jason Bourne movie. The chief complaint among them is the latest entry in the long-running series is too much like the other films. Which critics generally loved.

I watched Jason Bourne last night, and yes, it's a lot like the previous entries in the series, which I loved. There's brilliantly staged set pieces, a couple of harrowing car chases, some brutal beat downs and a bunch of hi-tech, international espionage.

How this is suddenly a bad thing is beyond me. Why critics, who previously loved this formula, suddenly have a problem with it, proves once again how worthless the opinions of Harvard-educated movie guys are. Get your shit straight, people.

Jason Bourne is awesome! It starts with a bang -- or in this case a punch -- and ends with a great throw down in the Las Vegas storm drains, which occurs right after one of the best car chases I've ever seen. Paul Greengrass, you know action and chaos my friend. Keep it up.

This IS a Bourne movie. I went in wanting to see a Bourne movie starring Matt Damon as Jason Bourne, and that's what I got. No complaints. Fuck you Harvard douchebags.

Damon is solid as usual, and Bourne becomes a fully-realized character by the end of the movie. Tommy Lee Jones makes for a great bad guy (spoiler alert) and I was mesmerized by Alicia Vikander, who plays an ambitious cyber spy.

I've loved this franchise since day one, and even dig the Jeremy Renner entry. It's good to have Bourne back, and I look forward to more entries in the future. A Good for me.