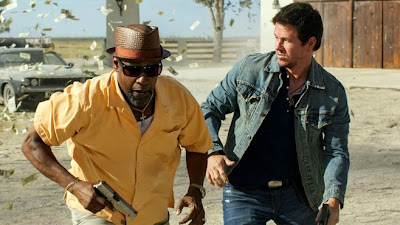 Nothing says the work week is over like a couple of brews, some violent bloodshed and a pair of boobies. Throw in a cast that includes Denzel Washington, Mark Wahlberg, Bill Paxton, and the hotness that is Paula Patton (and her boobs) and you've got a winner, right? Right?

A DEA agent and a naval intelligence officer find themselves on the run after a botched attempt to infiltrate a drug cartel. While fleeing, they learn the secret of their shaky alliance: Neither knew that the other was an undercover agent.

Truth is, 2 Guns isn't as much fun as it should've been. Yes, Washington and Wahlberg have a great chemistry, Paula Patton is hot and shows her boobs, and Paxton owns every scene he's in. But, and this is a heavy but for an action flick, there just isn't enough on-screen carnage to satisfy my end-of-the-week bloodlust.

Yes, there's a lot to enjoy in 2 Guns. And I did like my one watch for sure. But I'm not sold on the idea of watching this again.

Credit must be given where credit is due though; the final throwdown is a hoot and my hat is off to Edward James Olmos alongside Paxton. You couldn't hope for a better pair of bad guys.

But this still rates a Bad in my books.