Exit 727, Skinwalker Ranch and The Art of the Steal interview 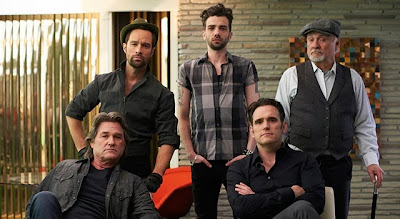 Talk to a Basementite born in the 70s and 80s, or any movie geek worth his or her salt, and there's general agreement that Kurt Russell is the man.

Think about it: Escape from New York, The Thing, Big Trouble in Little China, Tango and Cash and even later efforts like Breakdown and Executive Decision are either cult favourites or bonafide modern classics.

So when word reached The Basement that Russell has a new movie coming out -- his first starring role since 2007's Death Proof -- Jason and Shawn took notice. And The Basement Boys are proud to present a 15-minute exclusive interview with the producer of The Art of the Steal, Nicholas Tabarrok.

Nicholas talks The Art of the Steal, working with Kurt Russell and his all-star cast of co-stars, plus other genre flicks he has coming down the pike. It's a great interview, one of the best in Basement history.

Plus Jason and Shawn put two films on the chopping block; the crime-thriller Exit 727 and the spooky found-footage flick Skinwalker Ranch. But, and this is a heavy but, they break with tradition when it comes to throwing down with the merits of each. How so? Stick with us!

The latest episode lands in the a.m. Until then, here's a look at our filmed entertainment.