The Month of Horror Day 6: The Collection

October 06, 2013
Basement contributor Matt Bellamy has taken it upon himself to watch and review at least one horror movie a day for the month of October . . . because he's awesome that way! For his latest entry, Bellamy tackles one of the best movies The Basement reviewed last season. Sneriously! 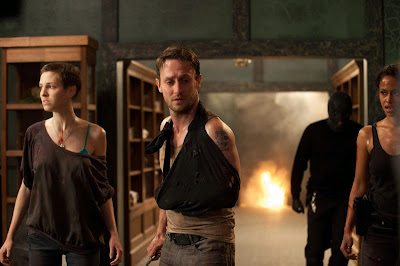 I am honestly surprised that this movie didn't create more waves when released last year, or that this growing franchise hasn't become more popular with horror fans because it's the real deal! The original, 'The Collector', was good fun but this one amps things up in just about every way, as a true sequel should! Brought to you by the team behind the later 'Saw' sequels, it feels like they're really able to breathe here and aren't saddled by any excess baggage like they obviously were when dealing with that series. There's no bloating and zero contrivances here, this is a lean, mean, killing machine! That's a very apt description for this film in particular actually, it does operate as a machine and the killer masterminds many different lethal contraptions and traps against his victims, similar to something out of 'Saw' but much more fun. The opening club massacre is something special where hundreds of good looking twenty-somethings are ripped apart by spinning blades slowly being lowered over the dance floor; mass carnage! The action eventually shifts to The Collector's warehouse which is really more of a funhouse of horrors and brutality as your usual stock of testosterone fueled characters meet their fates one by one and it all comes down to one man and one woman fighting for their lives and trying to stop the mad man.

Yes, the framework of the plot isn't really any different from anything you've seen before in the genre, and it's easy to predict who's going to bite it and when but the kills are glorious and there is some seriously inventive bloodletting here. Characterization is nothing special, the male protagonist is carried over from the first film and he's a pretty cool badass anti-hero type while the girl is cute, as they always are because the "fuglies" all get killed at the beginning. Oh, and of course it ends with the possibility of there being a sequel! I would more than welcome that sequel too, if it happens, this is a series that I hope has some legs and if you haven't checked it out yet, and you love horror, then... yeah, get on that, or something.