The Month of Horror Day 20: The Bay

October 20, 2013
Basement contributor Matt Bellamy has taken it upon himself to watch and review at least one horror movie a day for the month of October . . . because he's awesome that way! Tonight, Bellamy takes on one of the biggest department store chains in Canada. 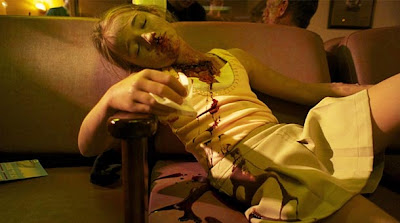 No, not your local department store but something far, far more horrifying...

Take 'Contagion', 'Slither', and 'Invasion of the Body Snatchers', toss into a blender and you have 'The Bay'! Quite possibly the first eco-environmental horror film I've ever seen, the story here is that over the 4th of July weekend in a seaside town on the east coast of the U.S., a parasitic virus begins to spread in the water and the humans who come into contact with it and are infected by it become mutant hosts. Fun fun! Shot in the ever popular "found footage" style, 'The Bay' has a very real world, documentary style approach to its filmmaking which really works in its favour because it adds a sense of eerie realism to the proceedings that may make you squirm in your seat even more.

You won't find many big name actors here because the idea is not to distract you with familiar faces but there are a couple you may recognize such as Kristen Connolly from 'Cabin in the Woods'. There actually is one very big name attached to this film and it's the man sitting in the director's chair, Barry Levinson. This is a guy who has helmed some extremely prestigious movies over his career such as 'Rain Man', 'Wag The Dog', and 'Good Morning Vietnam' so what is he doing dipping his toes in the waters of "found footage" horror? Honestly, not really sure, maybe he was bored and wanted to try something different but the results are pretty good! He seems to have a solid understanding of the genre while adding his own twists to it, keeping things very fresh, and the pacing is excellent.

I enjoyed 'The Bay', it didn't re-invent the wheel and I wouldn't classify this as a straight up horror flick but there sure are moments of horror that will creep you out, especially if diseases and parasites makes you squirm--isopods are nasty little creatures! The realism on display, especially in the earlier scenes, was my favourite part because I was very engaged and interested by how a situation like this would be handled and although the plague that was spread here would probably never happen, who knows what might in the future? Real world disease is the scariest of all!