The Month of Horror Day 2: Halloween III: Season of the Witch

October 02, 2013
Basement contributor Matt Bellamy has taken it upon himself to watch and review at least one horror movie a day for the month of October . . . because he's awesome that way! Today, Bellamy puts himself in harm's way as he proclaims this bastard sequel to John Carpenter's classic better than the original Halloween! 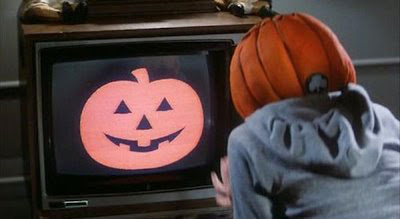 Time to call my honest love of horror into question! *Deep breath* here goes... I prefer this sequel to the original John Carpenter's Halloween.

No kidding! Now don't get me wrong, the original is a classic and is without a doubt the better movie, no question! It's not my favourite though, I don't get nearly as much enjoyment out of it as I do with Season of the Witch. A lot of people absolutely loathe this movie and I understand why: no Michael Myers, no Jamie Lee Curtis. Why was it even called "Halloween" if it didn't feature one of those two things? John Carpenter had an ambitious plan in mind for the franchise that did not revolve around them, that's why. He wanted to release stand-alone horror flicks revolving around Halloween with their own unique storylines and characters however he couldn't (or maybe he could have) predicted that the public outcry would be deafening. "WHAT!? NO MICHAEL MYERS??". And that was the end of that.

Oh, right, it didn't help either that the movie was pretty lousy but it's fun! It has Tom Atkins in it! The whole "bad guy motivation" is to kill as many kids as possible on Halloween night! This movie evokes the feeling of the holiday much better than the original and maybe that's why it wins so many points with me as the original is just about a serial killer trying to kill a babysitter and coincidentally it all happens on Halloween. *Yawn*. Give me masks that mutilate kids faces any day, just not enough of that going around these days.