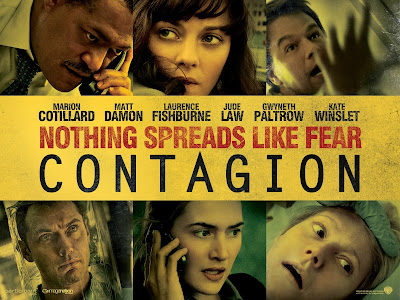 My fetish, with the end of the world continues. Can't get enough of it! Haha.

There are some serious motherfuckers in this flick I tell you! And Kate Winslet. The only thing I've seen her in, other than Titanic. Haha.

It's the end of the world via weird unknown disease. It builds up beautifully, kills a whole bunch of people and actually ends our current way of life. Did I dig it? To me, it was a steroid injected version of the movie Outbreak with Dustin Hoffman, Morgan Freeman....wait..another group of badassed motherfuckers...Contagion being a more global version.

I truly think, without a cast like in Contagion OR Outbreak, the movies would not have worked as well.
This is where I step outside our Basement B-movie crawlspace and salute the big name actors. I've said in the past that, because of the style of movies we watch, acting is never an issue. Contagion proves me wrong and, come to think of it, so did Outbreak. That's right. I was wrong.

Without these actors/actresses, this movie would have been a Bad.   But I'm going to give it a Good.