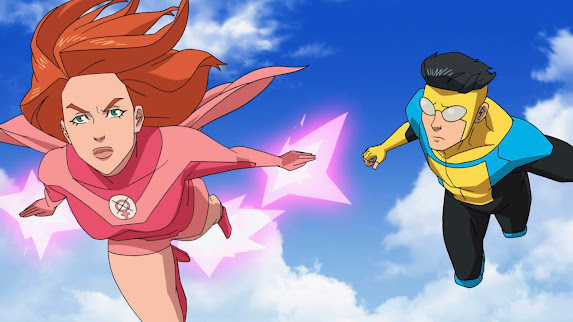 It's not often I find anything superhero related that I wholeheartedly recommend, but the animated series Invincible is just one of those pieces of media.

Invincible is an adult superhero series, in more ways than one. It has the violence, gore, and swearing you'd expect with that kind of tag line, but it's fairly adult with it's storytelling as well. Instead of characters taking a back seat to the action, as they do in most superhero stuff, their struggles and internal conflicts are front and center.

We get to see the consequences of wearing the cape and saving people, we get to see how difficult a job it is, and how you can't save everyone no matter how invincible you are. I was afraid this series would end up being just another "edgy" addition to the genre, but was pleasantly surprised at how mature it was.

Now, don't get me wrong. There's still plenty of fun, superpowered action to be had here. Thanks to it being animated, everything hits with greater impact; superspeed seems genuinely fast, and you see how frail typical humans are against these powers. This show has got layers, from the base entertainment on the surface, to the subtler human stories just beneath it.

As I said up top, I whole-heartedly recommend this show. Grab some goods, gather some friends, and prepare for several "oh shit" moments to be had. Invincible is a Good