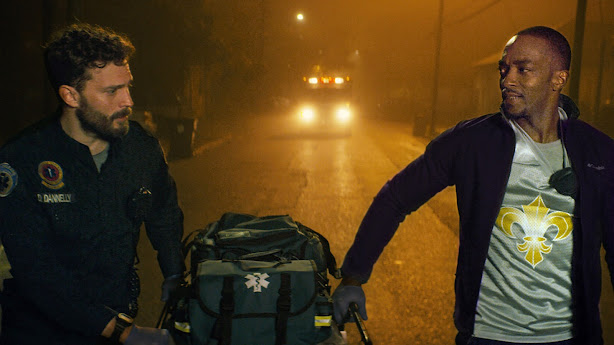 If you were looking for another addition to the niche genre of Anthony Mackie Sci-fi, I humbly present to you Synchronic.

It's definitely a step above Outside the Wire, but it's still not as cohesive as it could be. This movie seemed like an earnest, but clumsy, attempt to combine sci-fi, drug use, racism, and philosophical ponderings on death. You can tell the script is trying hard to tie these ideas together neatly, but in the end, the story comes out patchy and disconnected.

What doesn't help is our inconsistent main character. Anthony Mackie does a fine job portraying him, but the script he's working with can't seem to settle on who this guy is. Maybe he's a womanizing bachelor, maybe he's a science nerd, or maybe he feels out of place in his own time. It's not that you can't tie these threads together into one complex character, but the filmmakers didn't know the right knot.

What I did appreciate was some of the inspired cinematography. It felt like the camera was trying to heighten the emotions of each scene, rather than just blindly capture the moment as most movies do. Regardless of the script/directing decisions, it wasn't hard to tell the people manning the camera put some passion into it.

Despite the patchy nature of this movie, I'd still recommend it as a decent thought-provoker. Maybe smoke something and give it a watch, because I'd still call Synchronic a Good.