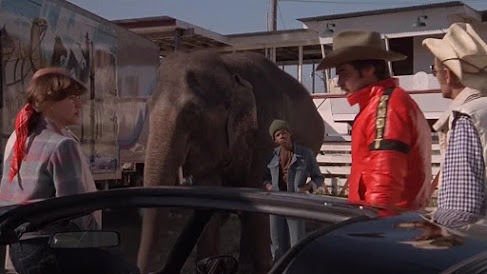 Tuesday has rolled around, which means it's time to hit the road, and outrun Smokey again...

I'm not going to write a synopsis for "Smokey and the Bandit II", since it's essentially a rehash of the first movie's plot... the only difference is the item being delivered is an elephant instead of beer.

The characters aren't any different either, except that The Bandit isn't as charming or likable as he was in the first movie.  The acting is no different either- though the addition of Dom DeLuise isn't enough to save this film.

"Smokey and the Bandit II" lacked the originality, charm, and sense of fun of the original.  It didn't really need to be made... and shouldn't have been made, to be honest.  I'm going to have to put it in "The Ugly".