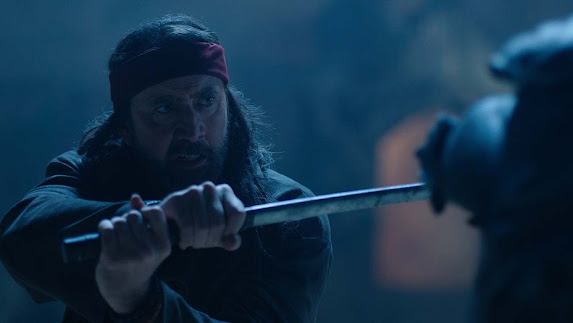 Stunt performers tend to be the most underrated aspect of an action film, as their physical finesse can give a fight the harsh edge it needs to have weight and impact. However, as Jiu Jitsu demonstrates, that hard edge cannot hold up an entire movie.

This dull schlock fest is only really concerned with showing off "cool" fight choreography, and couldn't care less about the dialogue, characters, or story as a whole. As a result, this movie is a boring slog that occasionally picks up a pulse once someone starts punching someone else, but even that gets boring after the 30th time it happens.

What this "film" fails to understand is the fighting can only be a tool used to tell the whole story. Like the engine of a car, it is functional, but a car needs more than just an engine to be drivable. The martial-arts action is but one part of the whole, and only by actually having a story, does the combat leave an impact.

I won't lie though, it is quite obvious all the stunt people are not phoning it in. They commit to their choreography with all the enthusiasm they'd have working on a big budget Marvel movie. It's just a shame their effort goes to waste, because everyone behind the camera either has no idea what they're doing, or just didn't care.

The only enjoyable part of Jiu Jitsu is, of course, the rambling scenes of the great Nic Cage. However, his hippie-warrior aesthetic can't redeem the entire movie, so I'd only recommend watching a highlight reel of his scenes. I don't recommend this at all. Jiu Jitsu is an Ugly.