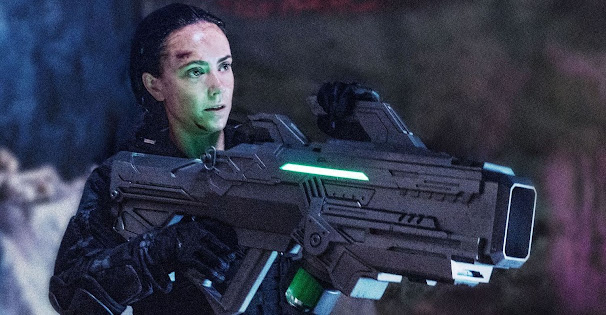 If the first Doom movie was an example of not trying hard enough to hit the mark, then Doom Annihilation is an example of what happens when you do the complete opposite. I've never seen a movie try so hard to steer completely in the wrong direction. It's impressive, actually.

There is so much about this movie that would make for great action cinema... if it didn't have the Doom name on it. This feels more like a fan remake of Aliens that happens to be wrapped in Doom wallpaper. There's a lot more attention paid to the military tactics and the team's internal politics than the actual "demons" we end of seeing.

It's a shame this movie couldn't be its own thing. I think, if this story had a competent director behind it, you would have something on par with The Raid in space. Everyone on screen is clearly giving it their all, and committing to their performances.

They don't always pull their characters off, unfortunately, but I think that's due more to the subpar script. So sure, this would need a slightly major overhaul with a new writer and director, but the potential is there. It's just that this gritty, grounded military style of storytelling does not work for Doom.

Doom is as over-the-top as the name implies. It's not goofy or absurd by any means, but it really tries to bring biblical hell very vividly to life... in a fun way, of course. Our main character is the Doom Slayer, an inter-planetary super warrior that perfectly embodies the legendary heroes of old.

I really like our genuinely bad-ass main chick in this movie, but unfortunately she isn't quite slayer material. Again, it's not a slight against her character, it's just that the writer/director put her in the wrong universe. Regardless, I do recommend this for some fun action scenes here and there, albeit surrounded by many dumb scenes. I didn't expect this, but I would technically call this movie a Good.