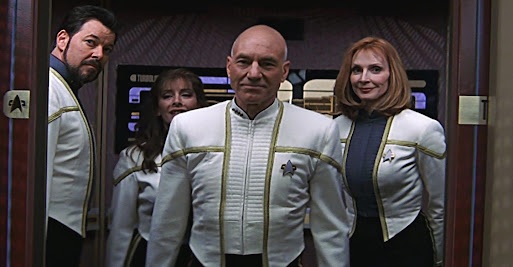 Open hailing frequencies!  It's time again to dip into the Star Trek franchise.  This time, we check out 1998's "Star Trek: Insurrection"...

While on a mission, Data is injured and attacks his team mates.  When Picard investigates he and the crew stumble upon a conspiracy that could bring about eternal youth for the members of the Federation.

But it could cost Picard and the Federation it's soul...

While the sets and models, and costumes are fantastic, visual effects aren't up to the same level- especially the sequence involving the cloaked Data and observation post.  In fact, it felt TV level.

The story itself isn't too bad- though I think the theme of colonization and forced relocation might've had more impact if the village in danger hadn't been so... evenly... white.  Though, even then, it dipped into the "white savior" trope a bit as well.

There wasn't much in the way of character development- though I'd say that Troi and Riker rekindling their romance was nice.  I also did like how they brought a bit of "evolution" to the development of Geordi's eyesight: going from the visor to implants to biological eyes.

Beyond these there wasn't much in the way of growth for the characters.

And once again, the addition of Worf felt unnecessary and a little shoehorned.

To be brutally honest, "Star Trek: Insurrection" is suitable as background noise, but not something to really pay attention to.  I found my attention drifting, even during the action sequences.

Compared to "Star Trek: First Contact," this movie is a "Bad".