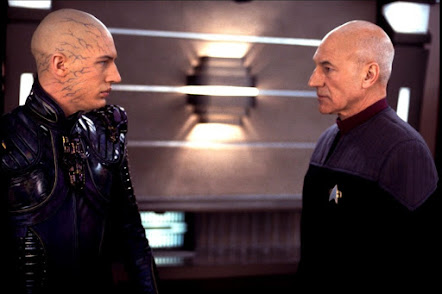 Tuesday arrives, and we open hailing frequencies as we join Captain Picard for another adventure...

The Romulan Senate has been overthrown, and a new Praetor has taken power.

The USS Enterprise answers the summons of the new, mysterious Praetor who claims to seek peace.

Just who is this mysterious new leader... and why are they so insistent on the Federation envoy being Captain Jean-Luc Picard?

"Star Trek: Nemesis" is one of the weakest installments in the franchise.  They tried to capture the tension and personal investment of "First Contact", but instead present us a rather flimsy excuse for Picard to be introspective and thinking about his life choices.  I liked how, in some ways they reversed the role he had with Lily in "First Contact"- with Shinzon being the in the "Ahab" frame of mind.

There is very little in the way of a deep character development in this movie.  From Picard, to Data, to Riker and Troi.  There are changes, but nothing of significance that's actually built upon during the course of the story.

And personally, if I were Captain Sisko, I'd start being hesitant about letting Worf hangout with is old crew...

It all rang kinda hollow to me.  Even Data's sacrifice.  If you've seen "Wrath of Khan," you'd have obviously seen the hints of Spock's "Remember" that left the door open for Data's potential return well before he sacrificed himself.