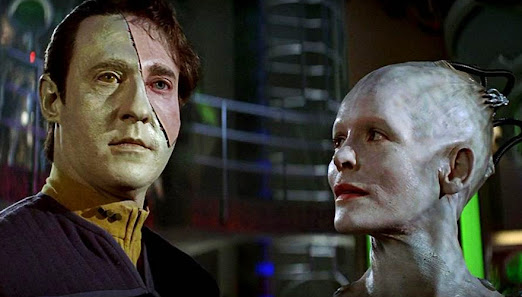 Tues has come- which means my gaze turns to the stars as I trek forward into my next review...

The Borg have returned with Earth in their sights.  During the ensuing battle, a small group escape into the past.  It's up to Picard and the crew to follow them and stop them from altering the past... and save the day known as "First Contact"...

This installment of the "Next Generation" series of movies is a much more intense and actiony one compared to "Star Trek Generations".  While the tone and visual style was bright and colourful in "Generations", "First Contact" is much darker and grimmer.  This movie is also much more "cinematic" than "Generations" as well.  The previous movie felt like an extended episode, while this one felt more like an actual movie.

I loved the story, and how they weaved the two lines of it while also keeping some separation between the two as well.  Both plotlines balanced humour, drama, and tension wonderfully.  I was able to follow both easily, but was also emotionally engaged by it.

While all of the characters got their moments- especially Troi and Riker, "First Contact" was really a Picard/Data movie.  They both got some wonderful character development and depth.  It really took advantage of Data's emotion chip from "Generations".  His growth was sprinkled nicely throughout the film.

The development of Picard's character primarily came during the "Ahab gotta hunt his whale" scene.  I must admit that Picard always struck me as being a little bit arrogant about the "evolved sensibilities" of Humanity's future.  It was nice to see him reminded that as a human, he's still flawed.  It brought a nice touch of relatability to him.

Worf was the only character that bothered me.  Not because I don't like him.  He's a great character, and loved how "Deep Space Nine" developed him.  His role in "First Contact" just felt like it could've been done by any Security Officer.  I just couldn't escape the feeling that he was added just for the sake of adding him, and drawing in the "Deep Space Nine" viewers.

I'm going to have to say, that of the four "Next Generation" films, this one is probably the strongest one, and my favorite.  A very solid "Good".