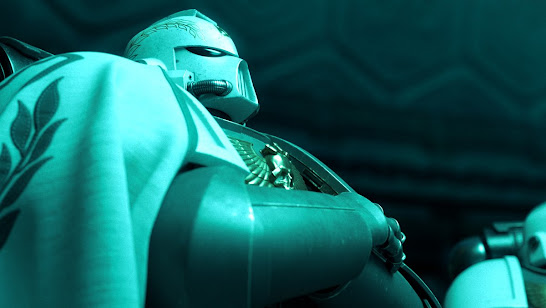 I'm sure many of you in the know have already heard the news the beloved Warhammer 40K fan-film project, Astartes, has been made official. Games Workshop is now working with the creator to make legit content in the future, and that's a good thing... right?

The original five parts of Astartes have been taken off YouTube, and now the only way to watch them is to go to the official Warhammer website. Now, that doesn't seem like a problem... until you watch the updated version of Astartes that Games Workshop made. They made Astartes worse!

Syama Pederson put a lot of love into creating his series of fan films, and had essentially created animations you could show in a 4K theatre. Instead of just copying and pasting these five shorts onto their site, Games Workshop decided to make some changes to them. They changed some of the already perfect editing, added new music where it doesn't belong, and the new music doesn't even fit that well.

What the original Astartes short films understood was the value of silence in building suspense. Through all five parts, there are some fantastic moments where all you can hear is the background noise, and you don't know what will happen next. Silence is skillfully used to punctuate the action, put you on edge, and make the weird alien orbs seem so much more alien.

Games Workshop clearly thinks silence is boring, and decided to throw generic action tracks over these moments and totally neuter them. What makes it worse is these new tracks are so inferior to the original music. They sound like there were ripped from a Warhammer playlist, rather than lovingly composed for each scene.

I realize there are many who aren't in the know, and have no idea what I'm talking about. Sorry, I just had to rant about this. I hate seeing great filmmaking made inferior by tone-deaf companies. Regardless, I totally don't recommend watching Astartes unofficially before Games Workshop makes that impossible through cease and desist. Are these changes an omen for future Astartes content? I think so. but only time will tell.