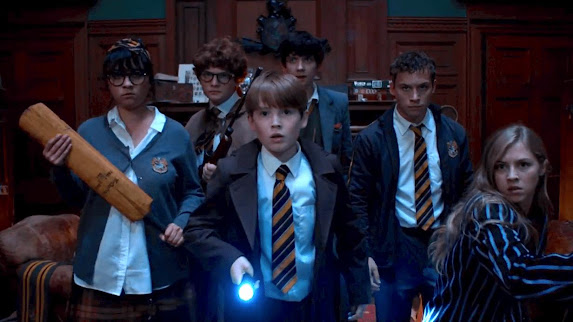 I think I've come up with a vague genre for a movie like Slaughterhouse Rulez: and it's called The First Draft. Like a first draft, the finished film hasn't ironed out the kinks in the story, and a lot of elements don't blend together all that well, at least not yet.

Now, you'd think mixing teen comedy and supernatural horror wouldn't be too hard, but evidently it is. Honestly, this movie feels like two movies in one, with how disconnected these elements are. What's even stranger is if you follow the script during the film, it's structured like an average movie of this genre.

This just goes to show that even if your script is half-way competent, scatter-brained directing can make it feel very disjointed. However, there are a few noteworthy aspects of this film, such as Tom Rhys Harries' performance as the main bully, Clegg. He manages to perfectly walk the line between posh prick who loves the smell of his own farts, and violent psychopath.

If only he had a better script/director, he could've really shined. What also stood out for me is how fleshed out the world of the boarding school was. There's a lot of attention paid to the school's social hierarchy, how the fraternities work, and the story behind its inception. It's so detailed, you expect its lore to matter in the end, but it doesn't.

And lastly, Slaughterhouse, you don't need to lecture us about fracking. I get it. You want to spread an important message using your platform, but it's so on the nose here.

Regardless, this movie's got some fun moments, and it's worth a laugh or two. I'd still call it a Good.