Trekking to the Stars: "Star Trek VI: The Undiscovered Country" (1991) 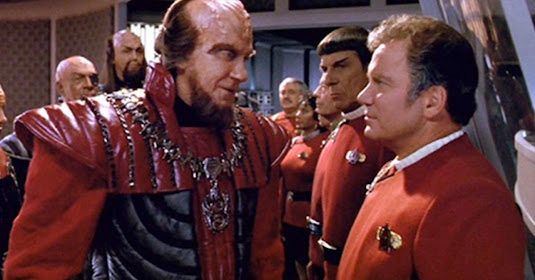 It's time again to sit in the Captain's chair, as we fire up the warp engines and review "Star Trek VI: The Undiscovered Country".

While on a mission to escort the Klingon Chancellor to a peace conference a surprise attack ends with the Chancellor dead, and Kirk and McCoy in chains.

Can the crew rescue their friends, and bring peace to the galaxy... or will their final mission end with death?

"Star Trek VI: The Undiscovered Country" is the final film featuring the original crew and cast members.  It is also one of the strongest movies in the franchise.  The story is tightly written, and brings you action, adventure, intrigue, suspense, humor, and drama in equal measure.  The pacing is lively and exciting.

I loved the performances given by all of the cast members, with special mention going to Christopher Plummer as General Chang.  His scenery chewing was grand and epic.  He brought such a huge sense of being to the character.  Just an absolute joy.

As a final film, "Star Trek VI: The Undiscovered Country" was amazing.  It helped to close out the story of Captain Kirk and the original crew nicely.  It was bittersweet, but also optimistic.  I will be rewatching it again soon for sure.  A "Good".