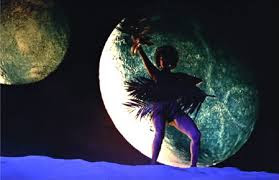 Are you tired of my "Star Trek" movie reviews yet?

Good, because we're heading at full warp into "The Final Frontier" with this week's installment!

A mysterious Vulcan has taken the Federation, Klingon, and Romulan ambassadors on Nimbus III hostage.  Their demand?  A starship.

The USS Enterprise is dispatched to rescue the captives, and arrest the fugitive Vulcan.  Soon, however, they discover that this enigmatic figure is going to take them to the final frontier... where no one has gone before...

"Star Trek V: The Final Frontier" is- sadly, one of the weaker films of the franchise (with some arguing that it's only beaten by "Star Trek: Insurrection"... but I'll get to that eventually).  While some of it can be laid at the feet of William Shatner- since he directed, he can't bear ALL of the blame, as there were some behind the scenes things (such as huge budget cuts, executive meddling, and Industrial Lights & Magic not being available do to the FX), that contributed.

When it comes to the story, I'd have to say that it was a slightly more grounded version of Gene Rodenberry's "search for God" premise from "The Motion Picture".  Given that the aforementioned movie wasn't a critical hit, it should've made Shatner wary of trying it.  Having said that, I did like that it wasn't put forth in as lofty and "Kubrick-esque" a fashion.  There was a lot more... humanity to it.

There were a couple of secondary themes that flitted about the story that I like: the theme of how our painful memories are important to our personalities, and who we are; and how the bonds of friendship can actually become bonds of family.

I was a little disappointed that, unlike "The Voyage Home", the supporting characters of Uhura, Scotty, Sulu, and Chekov didn't get significant moments to shine- though Uhura's "song and dance" moment was nice... although it also felt a bit out of place.

It was especially nice to see McCoy get some actual character development- since of the main three, he has the least known about him.  His scene revealing his "secret pain" to Sybok was great.

Sadly, the special effects were not all that great.  They were pretty obvious- especially during the rock climbing scene.  The "God" effects looked almost like they were picked up off the cutting room floor from "The Motion Picture", and looked pretty dated because of it.  These flaws seriously diminished my ability to suspend disbelief in what was happening.

While I'm willing to go out on a limb and not declare it the worst of the franchise, I will say that it's not really one I'd recommend for more than a single watch as part of a marathon.  Gonna have to beam it into "The Bad".