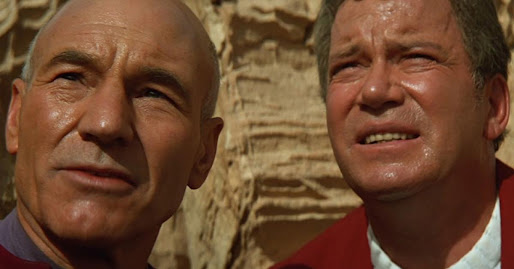 I'm back again with another installment of my "Trekking to the Stars" series.  This week, we check out Star Trek's "generation gap"...

It's the 24th Century.  Kirk has been missing in action for 80 years after saving the USS Enterprise-B.  The latest Captain of the Enterprise receives word of a family tragedy.

Before he can properly mourn, though, a threat approaches with ties to the "death" of the legendary Captain Kirk.  A threat that endangers millions.  A threat that only the Captains of the Enterprise can defeat...

This movie feels like an extended version of an episode of "Star Trek: The Next Generation"- which isn't necessarily a bad thing, as you don't really notice the time passing.  The story is slower than most movies, but is tightly written, and is engrossing enough to suck you right in.

The transition from the prologue on the Enterprise-B (which felt very much like the original crew movies), and the remainder of the movie (which felt like a "Next Generation" episode) wasn't jarring, and was oddly satisfying in fact.  It was an interesting way to contrast the differences in the two shows and the characters involved.

The tone of the movie at the climax- after Kirk's return, is a smooth and effective blend of both shows as well.

I liked that there was a nice balance between the primary plot, and the secondary plot involving Data and his emotion chip.  It provided Data with some great character moments and development without overpowering the main story.  Brent Spiner really nailed the performance in this film as well.

You could tell that the crew brought their experience working with a TV budget to this movie.  The visual effects weren't overly complex or expensive looking- but extremely effective.  The scene involving the crash of the saucer section was amazing- especially given that it was all done practically using models, etc.  When cut with the actors, this is an absolutely jaw dropping segment.  Love it.

I'd have to say that "Star Trek: Generations" is a great example of how to take a TV series and turn it into a movie without drastically changing the core elements of the series.  A "Good" for sure.