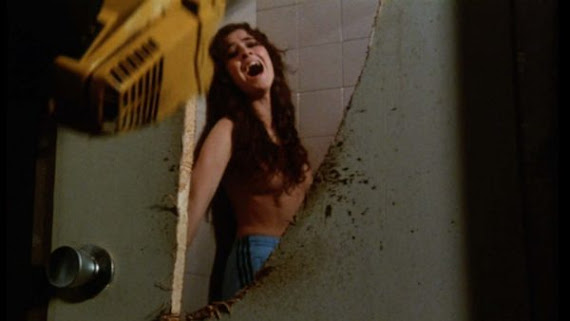 The 1982 Spanish slasher flick Pieces was marketed with two taglines; one being "You don't have to go to Texas for a chainsaw massacre," and the other "It's exactly what you think it is." And boy, are these accurate!

Clearly inspired by the early work of Italian horror maestro Dario Argento, Pieces is a nasty... piece... of work that wears its exploitation genes on its sleeve (the movie was written by exploitation filmmaker Dick Randall). It tells the story of gruesome chainsaw murders at a college campus, and the police investigation that follows. The killer's motive? To build a human jigsaw puzzle piece, by piece, by piece...

The film has been heavily criticized, saying it borderlines on pornography, and displays a negative attitude toward women. And it does! I've defended many a slasher film that's been similarly denounced, but Pieces takes things too far. Yeah, I said that. The violence is extreme, and all of it is directed at women who's sexuality is on full display. This movie was made to tease, turn on, and then gross out. That's it. On that level, it's well made despite a low, low budget. But it's neither clever, nor fun to watch.

That being said, I understand why it's developed a cult following and remains a drive-in and grindhouse hit to this day. If this is your pint of ale, then it more than delivers the goods! Hell, the movie is almost 40 years old and we're still talking about it. And it did gross me out more than once. This was the filmmaker's mission, and mission accomplished! But I'm not going to watch Pieces again, and that means it's a Bad.