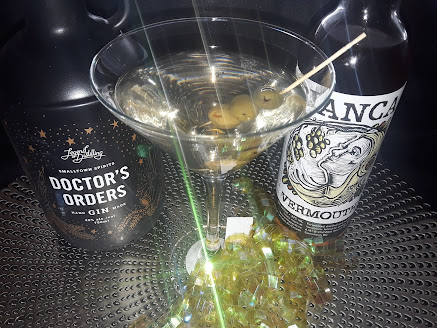 One of the film franchises I grew up watching was "James Bond".  As a fan, I always wanted to try a, "martini- shaken, not stirred..."  Well, recently, I took the plunge and gave it a try.

It's a fairly easy drink to make: pour gin and vermouth into a shaker filled with ice.  Shake.  Pour.  Add the iconic martini olive.  Drink.

The first thing I noticed was the swirly "oil and water" sort of appearance to the martini.  It was... interesting, but didn't actually do a lot to appeal to me.  The second thing I noticed was that it was actually kinda bitter from the gin.  There were hints of something else- which I assume was the vermouth.  Each sip was different due to the inconsistent way the two mixed, which made the experience a bit more intriguing to me.

Personally, I'm not fond of a plain martini.  Having said that, I do believe it is a great starting point for a bit of exploration.  Instead of a dry vermouth, a sweeter one can be used instead in order to counterbalance the bitterness of the gin.  I found that just adding a few squirts of lime juice created a nicely different martini.  Using crushed ice in the shaker instead of cubes could lead to a change in the texture of the drink, as some of it would wind up in the cup.

In fact, the next time I make a martini, I plan on using crushed ice, and adding pink grapefruit juice.

While I wouldn't really recommend a "normal" martini, I would certainly recommend trying it with subtle changes such as citrus juice, sweet vermouth, cranberry juice.  I will be doing so in the future.  Because of it's potential for finding enjoyable variations, I'm going to give it a "Good"