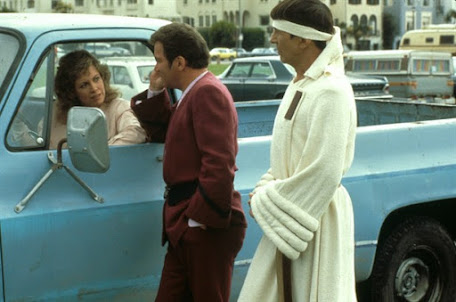 It's time again to beam into action and adventure with Kirk and crew as we open hailing frequencies and check out "Star Trek IV: The Voyage Home"!

Kirk and his crew are en route to Earth to stand trial for stealing the USS Enterprise.  As they approach, they discover that a probe is attacking the planet.  The only way to stop the probe is to respond...

But the only species capable of responding have been extinct for a couple of hundred years.  It's now up to the crew to find a way to save Earth and the Federation...

This is the final installment of "The Spock Trilogy".  The story is very much a lighthearted adventure compared to "Wrath of Khan," and "Search for Spock".  The laughs are the sort to get you rolling on the floor, but are well written, and smoothly inserted into the story- coming from the characters being out of their element.  By the end of the movie, you feel lighter, and bouyed.  The story's tone is a much needed relief after the more sombre and heavier feel of the previous two.

The theme of ecological awareness and the need to protect it is present, but isn't used in a heavy handed fashion.  It's presented in a quite, philosophical manner that doesn't interfere or hamper the rest of the adventure and gentler tone of the movie.

One of the things that I really enjoyed about "The Voyage Home" is the fact that the supporting characters of Uhura, Scotty, Sulu, and Chekov got moments to shine and contribute to the story in a more active fashion.  I especially enjoyed that Chekov got to shine a bit more with the interrogation and hospital scenes.

Spock receives the final bit of character development during this part of "The Spock Trilogy", as he learns to integrate his human-based emotions into his personality and life- in essence, this is the final part of Spock's voyage "home" emotionally.  His interactions with the crew, and how they cause him to contemplate his human side wonderful to watch.

It was interesting to see a movie where Kirk wasn't the main focus.  I have to admit that I kinda liked it.  While he didn't get much in the way of emotional development in this movie, he too comes "home" in that he gets the chance again to fulfill his "first best destiny" as Spock once put it.

By the end of "The Voyage Home", we felt lighter in mood, and were left smiling as the USS Enterprise-A is revealed.  The franchise finding it's proper footing, and coming "home" to the fun, humor, and charm of the Original Series.  I'm giving it a "Good".