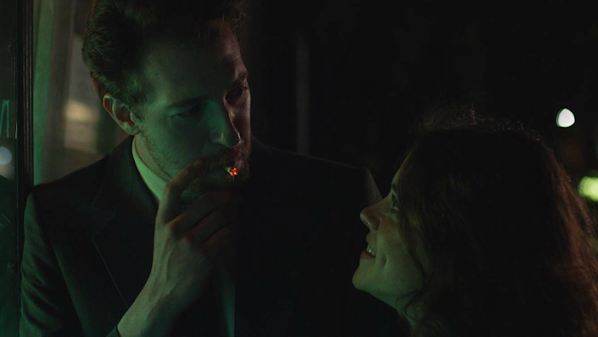 Go/Don't Go is not our usual pint of ale here in The Basement. It's an apocalypse film without the apocalypse... which makes it feel relevant given our pandemic times. It's a quiet film full of long silences and haunting images, with a lot to say without actually saying much of anything.

Writer/director Alex Knapp stars in this film about the apparent last man on Earth following some sort of devastation. Only the water and power works, and there's fresh food on store shelves, suggesting there are people out there, if only Knapp's character could let go of his past and move on in life.

In that lies the underlying theme of Knapp's film, or at least I think it is. I'm not usually much for digging beneath the surface of a story, but Go/Don't Go forced me to do that. No complaints, as this is worth your time if you're willing to stick with it.

I found it a captivating piece of work that held my interest despite the lack of much happening on the surface. We're slowly fed details as Knapp shows us the day-to-day existence his character has carved out for himself as a means of survival... which feels relevant to our lives pre-COVID. And the isolation he portrays on screen is timely given the lockdowns in place in much of the world.

The viewer feels all of that, and the character's mounting desperation for something -- anything -- to hang on to, even if its his dead love, who is well played by Olivia Luccardi. In the end he, like us, know we have to let go of the past, no matter how good it was, in order to move on. The pain of doing that comes through as well.

Go/Don't Go isn't for everyone, but if you give it a chance, I think you'll find the watch worth it. A Good for me.