Marcus Flor vs. Outside the Wire 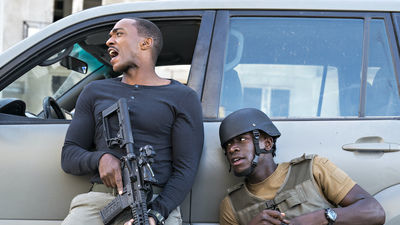 I'm a sucker for sci-fi, so I usually enjoy it when sci-fi is mixed into other movie genres to spice things up. However, I can also tell when sci-fi elements are just added for surface-level flare, as they were in 2021's Outside the Wire.

This action thriller is more of a military style Training Day (2001) than anything else; there's just a few robots tossed in to make it stand out from the crowd. The core plot is the typical nuke chase against some Russian bad guys, with the robots really not playing a fundamental role. You might say the android main character is fundamental to the story, but to me he felt more like a disgruntled soldier wearing the disguise of an android.

Aside from his ninja moves and the occasional dissing of humans, nothing about Captain Leo (Anthony Mackie) really screams android. His mannerisms and behavior so closely mimic Denzel's character from Training Day, they leave no room for the robotic side of his personality. Not to mention he's a billion dollar, top-secret killing machine under no supervision who constantly defies authority.

As stated before, this is a military Training Day with a dash of robots, so watch it if that sound appealing. It's not bad, but it's not great either, so I'll call it a Good.