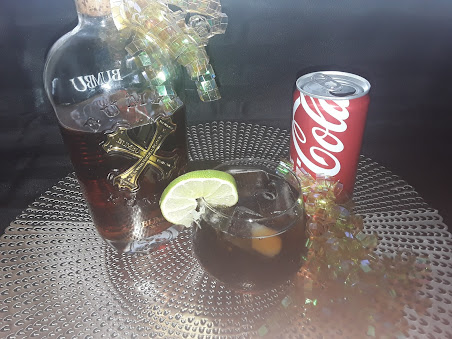 Since it seems that my #52BottlesOfBeer series did so well last year (and because my liver hadn't been punished enough during it), I was asked to see if I could do something similar for 2021...

So, here I am.  Drinking.  Again.  With a difference though.

This year, I will be making, drinking, and discussing a different cocktail, high ball, or other boozy beverage each Wednesday.

I decided that I would start simple.  Real simple... Rum and Coke simple.

All you need is rum, Coca-Cola, ice, and maybe a lime slice for that fancy pants feeling.

For this one, I used Bumby Rum.  It has a nice vanilla flavor by itself- so having a shot of the rum itself is acceptable.  Traditionally, I use Lamb's Navy Rum.  If you don't have some rum with a vanilla taste, you can use Vanilla Coke instead.  You can also use light rum as well.

I just happen to prefer dark rum as it's a bit stronger.

It's a drink that requires very little effort or energy to make, and is great for when you're young and out at the night club.  It doesn't have a super memorable taste to it, but has enough flavor to satisfy your thirst.  The best thing about it is that it's one of those drinks you can actually nurse throughout your night out, as it's not the sort of drink you guzzle.  It's a sipping type of drink, so you can take your time, enjoy yourself, and actually relax.

While it's not really a drink you'd make at home, it is a nice beverage to have at the pub with friends.  Because of that, I'm going to have to serve it up in "The Bad".