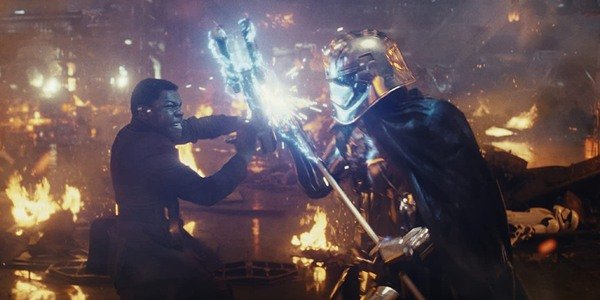 It's Wednesday again- which means it's time to fire up the X-Wing Fighter, and speed off to a galaxy far far away and battle the First Order again...

The First Order has destroyed the Republic Senate- and is working it way towards the Resistance headquarters.  The Rebels are forced to flee as hope slowly disappears.

Only one person can save the Resistance now: Luke Skywalker- the Jedi Master that defeated the Empire years ago.  But will he come out of his self imposed exile to bring hope back to the struggling Rebels...?

I'm not going to lie.  "The Last Jedi" is not my favorite of the sequel trilogy.  Of the various story lines, the one I did like the most was that involving Rey and Luke... though dipping into the "exiled Jedi Master" element makes you wonder why the Jedi haven't learned to deal with failure all that well.  Obi-Wan, Yoda, Luke...  When shit hit the fan, they didn't stay in the fight.  They ran and hid.  Luke's running was weakest reason of them.  But I still enjoyed that story line.

Certainly more so than the one involving Finn and Rose.  I felt that it wasn't all that essential to the overall plot of the movie, and came across like filler.  It was like the producers were thinking, "Hmmmm... we're short a few minutes.  I know!  Let's put them on a planet so they can ride strange looking horses!  We can then make plushies of the horses and sell them!"

The plot line revolving around the fleeing of the Resistance wasn't too bad- but mostly because of the interactions between Leia and Poe.  If it weren't for those two characters, I probably wouldn't tuned out most of the movie in those scenes.

Of the characters, I enjoyed the development that Poe, Leia, Rey, Kylo, and Luke got.  It was great to see them grow and get more depth.  I was a little disappointed in Finn's character in this movie, as he was kinda one note- "Gotta save Rey!"  She's learning to become a Jedi badass, Finn- no need to worry.  I must also confess that I wasn't too keen on Rose- though certainly not the extent that I would harass her off of social media.  I just found the character to be simplistic and dull.

The movie is- once again visually stunning.  My favourite scenes were the fight scenes on Snoke's flagship, and the final fight between Luke and Kylo.

Due to the less than compelling story line, I found myself not enjoying myself as much as I would've like.  I'm going to have to give "The Last Jedi" a Bad.