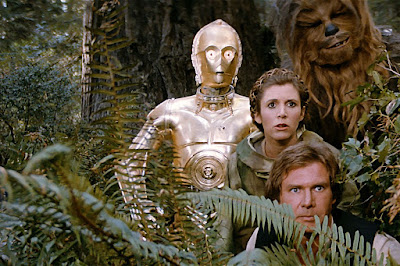 It's Wednesday- which means it's time once more to lock and load, and jump into the trenches as I join the Rebel Alliance for their most dangerous mission so far...

Times are desperate for the Rebel Alliance as news of a second Death Star reach them.  Princes Leia, Han Solo, and Chewbacca must go on the attack while Luke Skywalker must confront his father... Darth Vader.

The future of the Galaxy... and the fate of the Jedi are in their hands...

Of the Original Trilogy, I would have to say that "Return of the Jedi" is my 2nd favorite installment.  The series had evolved from a fairly simple fantasy story in "A New Hope", to something a bit deeper and more complex.  There is a nice weaving together of action, drama, and humour.  I loved how it starts out making you think most of the movie is going to be centered around one thing- only to head in a different direction after the opening act.  While the deeper emotional elements are primarily reserved for the Luke/Vader plotline, the story arc following Leia and Han is still enjoyable as the more whimsical nature of it evens out the "heavier" tone and feel of the primary plot.

Most of the character development is reserved- once again for Luke and Vader, while Leia, Han, and the others don't get much beyond the reveal about Leia and Luke.  I was a little disappointed that the supporting characters didn't get much development, to be honest.  I understand that after the reveal in "Empire Strikes Back" that this one would probably be more Luke/Vader centered, it was still sad to see the other characters get shorted in this department.

Also... not a huge fan of Ewoks.  They're better than Jar Jar Binks... but still not a fan of them.

As usual, the visual effects were stunning- especially the speeder chase on the Endorian forest moon.  Just beautiful.

And of course, we can't do a review without mentioning the "slave" Leia costume.  Actually, rather than just mentioning it... I'm going to show it, and let it speak for itself: 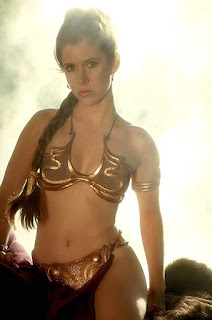 So, with that image in your brain, I'll leave you by saying that "Episode Six: Return of the Jedi" is a solid gold "Good".