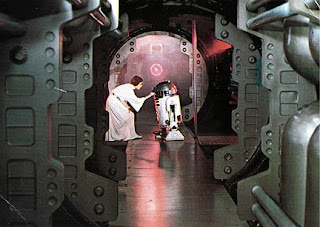 A long time ago, in a galaxy very near, an iconic franchise was born...

Rebels have just stolen the plans to the Empire's ultimate weapon.  The brave Princess Leia has been captured- but the plans are nowhere to be found.  Will she crack under the vicious interrogation of Darth Vader?

Meanwhile, a chance encounter with two droids soon propels a young farmer into the larger galaxy... a galaxy in peril as he seeks to rescue the princess... and begin the journey to fulfill his destiny...

Despite it's age, "Episode Four: A New Hope" holds up extremely well- much better than the prequels, certainly.  It's a well crafted, coherent, and well paced fantasy quest movie in space.  There is an excellent balance between the action, the drama, and the humour.  While the plotline is fairly predictable when examined via tropes used in the fantasy genre, it's still an enjoyable hero's journey type of story.

The characters- while also pretty predictable in their roles, are also at the same time, unique from each other, and engaging.  You become invested in them as the story unfolds, and grow to like them- and especially cheer them on.  They are both strong, but also flawed characters that over the course of the franchise, grow wonderfully into rich, complex people.  "Episode Four: A New Hope" was a great starting point for them.

What to say about the acting?  Well, without the amazing talent of Carrie Fisher, Mark Hamill, Harrison Ford, Sir Alec Guinness, Peter Cushing- and the astounding voice acting of James Earl Jones, I don't think this movie would've become the cultural icon it became.  Just a well rounded ensemble of performers who all brought life, energy, excitement, and awe to their roles.  They all engaged you without you really noticing until the end credits.

I'm torn though, when it comes to the visual part of this review.  I love both the original theatrical release of this movie- because it wasn't so CGI heavy.  The worlds were full, without being too busy for the eyes to keep track of everything.  The colour palettes was simpler as well- with such a beautiful contrast between the dark and light colours.  But I also love the later "special editions" because of the added background bits, and "cleaner" look to the textures.  But the thing I love about both editions is that the world looked lived in.  It wasn't all sleek and super clean.  The ships, droids, clothes, etc showed wear and tear on them- which you don't see in a lot of movies... especially sci-fi ones.

I think it goes without saying that "Episode Four: A New Hope" is a great film- and in my opinion, still holds up strong today.  A stellar "Good".