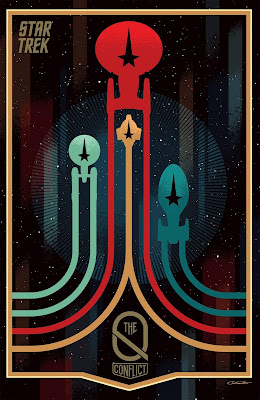 I enjoy comics.  I enjoy Star Trek.  I really enjoy when the two come together...

When a dispute between godlike beings threatens the galaxy, it will take all of Starfleet's best captains to stop it.  Join James T. Kirk, Jean-Luc Picard, Kathryn Janeway and Benjamin Sisko as they go head-to-head in a competition that will determine the face of the Earth and beyond.

When I saw "Star Trek: The Q Conflict" on the shelf in my local comic shop, I was taken by the cover design.  Then I read the synopsis I quoted above.  I was hooked.  I bought it and skipped my way home to read this grand new adventure.

The premise is great... but the execution wasn't.  The pacing was quick and energetic- but only because there was very little real substance to the story.  There was very little actual drama, conflict, or sense of danger.  It just was.  I felt by the end of the story that the premise was just an excuse to bring all of the Captains, and some of the godlike beings together.

The characters weren't bad- but not great either.  NONE of them got any sort of depth given to them or insight into what made them tick or act they way they did.  This includes the antagonists.  Q, especially, actually got hit hard in my opinion.  I felt that- for the most part, he was in character in terms to the "games", his actions towards the Prophets in the Bajoran Wormhole were really out of character for him- as were his actions at the final climax.

I was also bothered by how during the story, the protagonists kept saying that they couldn't trust Q to keep his word... but at the end, when a peace treaty is drafted up, they all say that- yes, he can be trusted to keep his word.  What the fuck? 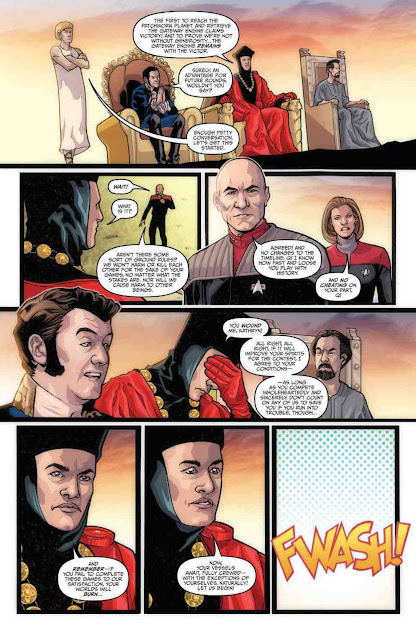 As you can see from the image above, the interior artwork is gorgeous.  While the faces of the characters are off in a few panels, they are overall, quite accurate.  I felt Trelane was especially well done in terms of artwork.

But sadly, gorgeous artwork isn't enough to save this comic.  It hurts me to say this, but "Star Trek: The Q Conflict" wasn't worth buying or reading.  I was really quite disappointed in it, and I have to give it an "Ugly".