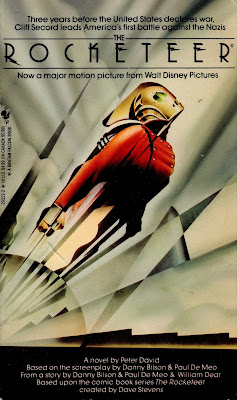 Those who know me will tell you that when it comes to heroes (and many things in general), I tend to lean towards ones either created or inspired by the pulp comics and matinee serials of the 1930's and 40's.  One such hero that leads the pack for me (right next to The Shadow) is The Rocketeer...

Cliff Secord is a racing pilot- making his living, and is happiest when breaking records, and riding the contrails of disaster.  After a shoot-out between thugs and the FBI destroys his plan, he finds the Cirrus X-3... a rocket pack.

Now, he must race for his life as gangsters, federal agents, and Nazi assassins hunt for the rocket... and the only man brave enough to use.  Men have died for this weapon... Cliff is next in line...

"The Rocketeer" is based on the 1991 movie, and is a pretty good adaptation.  It not only follows the movie closely, but manages to add little details, thoughts, etc without changing the overall narrative of the source material.  The pacing is quick, energetic, and agile- with nice, smooth transitions from the action scenes to the more dramatic ones.  The prose flows evenly, and is really quite easy to read.

Peter David manages to create a feeling and an atmosphere, that not only matched the movie, but had nice echoes of the pulp comic era without seeming dated.

I enjoyed the movie- and I enjoyed the novelization.  In fact, I think I'm going to go have a tip and sip while re-reading "The Rocketeer" again  A Good for me.