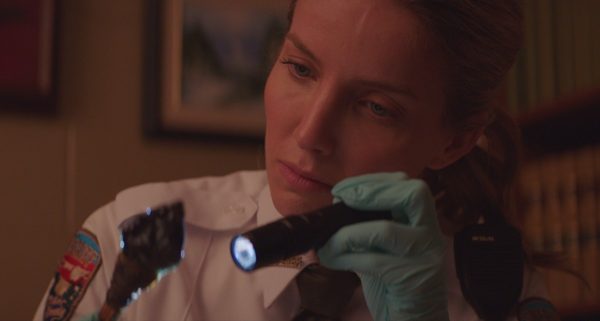 The Silencing is one of those pleasant films that comes out of left field and surprises you with a right/left combination, completing winning you over as a movie viewer.

This Canadian thriller from director Robin Pront and writer Micah Ranum reinvigorates the tired serial-killer genre with an exciting story full of twists and turns that keep you guessing for most of its running time. There were several WTF moments that had me smiling with gruesome glee at what I was watching.

Shawn and I have watched hundreds, if not thousands, of movies, many of them horror and thrillers. Rare is the day we're surprised anymore. But this one got me a few times thanks to some clever writing and misdirection. Bravo, guys!

The story follows a reformed hunter (Nikolaj Coster-Waldau) and a small-town sheriff (Annabelle Wallis) who get caught in a deadly game of cat and mouse when they set out to track a killer who might have taken the hunter's daughter five years earlier. Sounds pretty 90s serial-killer movie, doesn't it?

But Pront and Ranum freshen it up with some genuine suspense and good writing and filmmaking. Pront's style reminds me of early David Fincher, but that's not a complaint. This movie looks good and moves fast. I wasn't bored for a second. And the killer actually made me jump when he first appeared on screen.

Coster-Waldau and Wallis are very good. It was refreshing to watch characters who reacted believably to the situations unfolding in front of them, or least in a way that I would have. And I applaud the way the movie resolved itself, right down to dispatching the bad guy. Yes, folks, justice prevails here.

The Silencing is one of the better movies I've seen this year. And I hope it finds its audience. It's a Good!