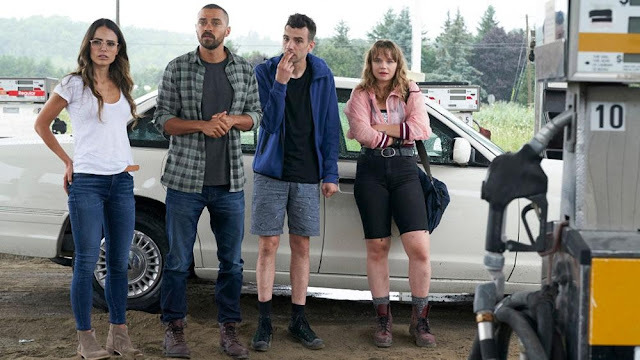 Random Acts of Violence isn't the movie I expected from Jay Baruchel. Best know for comedies like Goon and This Is the End, I anticipated something more comedic and satirical and, while those elements are there, this is a blood-and-guts horror movie through and through.

Jesse Williams is the writer of the most popular R-rated comic going. Loosely based on a series of real murders along the I-90, his creation begins to come to chilling life when he, his girlfriend (Jordana Brewster), creative partner (Baruchel) and assistant (Niamh Wilson) drive from Toronto to New York for a comic-book convention.

There are elements of satire in Random Acts of Violence. Baruchel and Chabot have something to say about the entertainment industry, fandom and basing art on real-life horrors. But they also pull out all the stops when it comes to the violence. These aren't Jason or Freddy style murders, but killings that feel real. And things boil over into an almost over-the-top finale that would have felt right at home in a Dario Argento movie.

Suffice to say, I loved it! This movie is fun, for us damaged horror fans that is, and gory and intense; everything I like from a Friday night flick. The cast is great, and Baruchel is one hell of a fine horror director. I hope this is a genre he plays around in for a while because, like Jordan Peele, he's got the chops for it. Must be that fine line between horror and comedy...

Random Acts of Violence is a Good. See it!