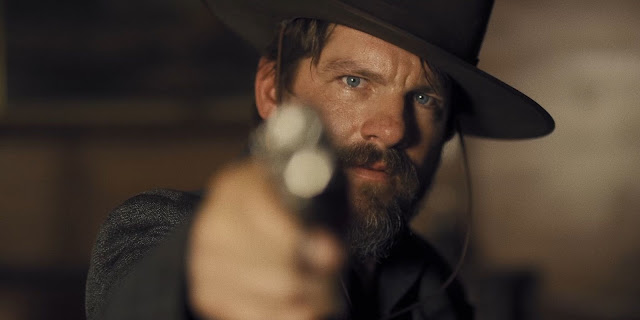 I love Westerns, and I love horror. So a horror/Western should be a done deal in terms of a good night at the movies, right?

Well, sometimes. Bone Tomahawk was great, and I didn't mind Dead Birds. The Burrowers had potential, but wasn't quite a win.

Sadly, The Pale Door from director/co-writer Aaron B. Koontz is also such a flick. All the elements are there are on the Western front, from the gang of outlaws looking to rob a train to a gunfight on Main Street. And the horror tropes -- coven of freaky ass witches, blood and guts, and a few jump scares -- are also on hand.

In fact, the film reminded me a lot of From Dusk Till Dawn in the way it plays out. We get a straight-up Western until about the 50-minute mark, then the witches come into play in the film's best -- and bloodiest -- sequence. I was impressed!

The problem I have with The Pale Door is the tone and pacing. The film moves too slowly to generate much excitement, at least until the witches are revealed. THAT scene has everything I'd hoped for and more. But once the reveal is done, things slow down again and just kinda flare out. Too slow = Jason bored.

As for the tone, this is a deathly serious flick when I would have preferred something along with lines of  From Dusk Till Dawn. Everything about The Pale Door screams over the top, and that's how Koontz should've played it... I hate should'ves.

So lots of potential, but not quite a win. On the scale of the Good, the Bad, and the Ugly, this is a Bad.

The Pale Door hits theatres, On Demand and Digital Aug. 21 from RLJE Films/Shudder.