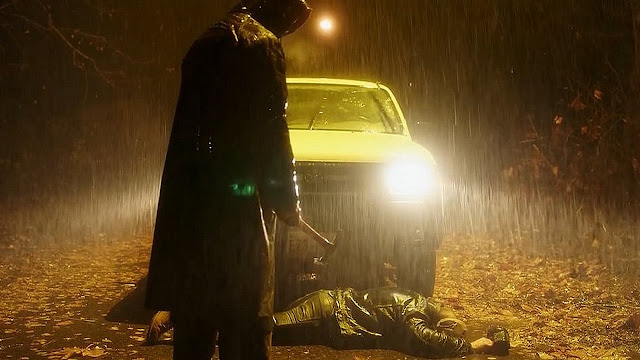 I've become a big fan of writer/director Padraig Reynolds, having dug his Rites of Spring and Dark Light a lot, I was excited for his latest, a slasher throwback called Open 24 Hours.

The concept is simple: a paranoid woman with a violent past gets an overnight job at 24-hour gas station. On her first shift, which is a particularly dark and stormy night, her past literally comes back to haunt her.

Plot and character development aren't the most important thing here. There's just enough of both to hang the movie on. It's the tension and violence that are the focus, and there's plenty of it. The gore doesn't feel exploitative though, at least no more so than similar recent offerings like Halloween (2018) and Random Acts of Violence. It's an integral part of the proceedings.

This is, after all, a slasher movie.

Mary, as played by Vanessa Grasse, is a great Final Girl. She's strong, yet vulnerable. Beautiful, but not sexualized. And we are kept guessing for a good portion of the running time if all that she's seeing or experiencing is in her head.

As I said earlier, this movie is tense. Once it gets going, it doesn't really stop. And Padraig manages to use the single location -- which is as much a star of the movie as the people -- to great effect. He and cinematographer David Matthews light and shoot the hell out of it, giving the movie a bigger feel.

This is gruesome and fun stuff, and I can't wait to see what Padraig does next. Yup, this one is a Good!