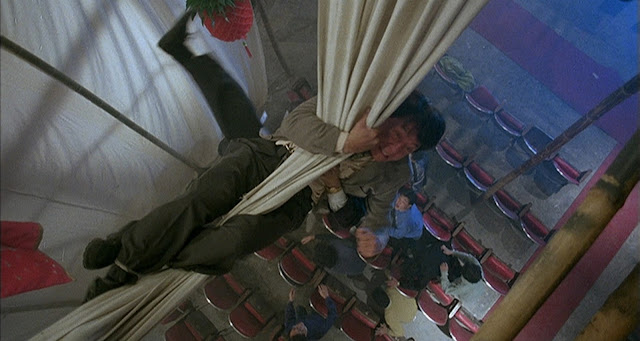 I've been in quite a kung fu mood as of late, so I decided to check out Jackie Chan's Crime Story.

Unfortunately, this really wasn't a martial arts flick, even with Jackie being front and centre. This movie was trying to be more of a traditional action movie, to its detriment, in my opinion. The problem is this film ended up feeling like a martial arts movie, but without the fighting.

Just as in kung fu fashion, this movie had a meandering plot based around a bunch of set pieces. However, the set pieces are mostly standard gun fights that would've been great at the time, but seem simple nowadays. It doesn't help that in between these set pieces is a pretty generic story without any interesting characters.

However, there is one genuine fight scene in this movie, and it was excellent. Jackie gets into a scrap in a marketplace, and it's a real knock-down, drag-out brawl. It's a shame there wasn't more of these scenes in this film.

All in all, this movie wasn't really anything special. Check it out for the one fight scene, but otherwise avoid it, because this one is a Bad.