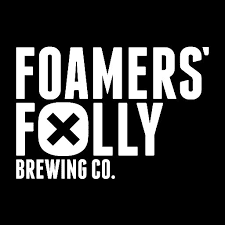 Sooo, the radio broadcast of "From the Basement" has been pre-empted due to the Stanley Cup playoffs...

Well, since I'm one of those rare Canadians that really don't give a poutine about hockey, I'm not pre-empted.  Please feel free to send hate mail about this to either basementreviews@gmail.com..  But, frankly, no hockey game is keeping me from my weekly tip and sip. 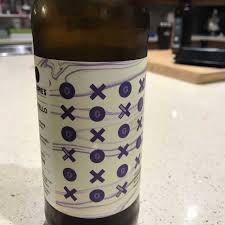 The label is pretty simple.  A creamy background with a bunch of blue circles and X's.  There isn't much I can say- except that I do like the combination of the cream and the blue... especially the "wisps" of blue smoke that streak across the background. 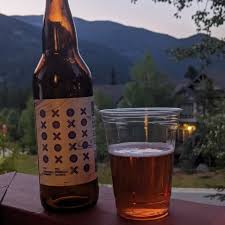 This beer has a lovely sunset gold colour to it that was quite pleasing to the eye.  Fans of beers with a good head of foam will probably be disappointed, as the foam does dissipate fairly quickly.  To be honest, I quite enjoyed the colour, and sat just staring into it's golden depths for awhile.

I wasn't quite sure what I was expecting from a blackberry and lemon blend, but the first sip was not it.  It was a intriguing sour blend that I wasn't quite prepared for.  It took me by surprise and made me interested in how consistent it would be.  The best way to describe the first sip is this way:  It called me a bitch, then proved why I was on.

That first sip was a surprise.  And the rest of the bottle kept me in a steady state of unbalance.  Sometimes the blackberry was dominant- other times, the lemon.  It was like a ballet between the two- and I loved it.  I love when a brew can keep me guessing about what the next sip will bring me.  It makes what I do more of an adventure than a chore... especially when after you've worked your way through 30 plus beers.

I've gotten some experience at predicting what I could expect from certain types of brews, and certain brewery's.  I have to say that Foamers' Folly's Blackberry Lemoncellow Sour Ale was able to buck that trend, and give me a pleasant surprise.  If you're a fan of sour beers, give it a try.  A solid "Good".