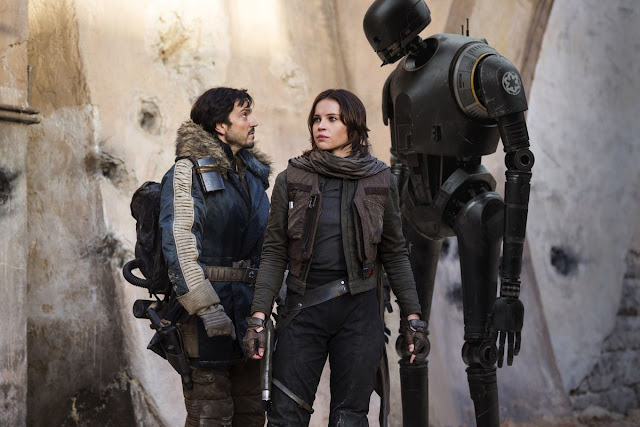 It's time again for me to take to the stars and fight the good fight.  Today, I get a little rogueish...

The Empire's ultimate weapon is nearing completion- allowing the Emperor to rule unchallenged.  But there's a problem: an Imperial Pilot has defected with news about a weakness that had been secretly built into it.  This news drags the a small team into a battle that could be the end of the Rebel Alliance... or the start of a new era of hope...

"Rogue One" is one of the best instalments in the Star Wars franchise.  The story is strong and well crafted.  It fills in one of the most pivotal moments in the story, while also fleshing out the Star Wars universe.  I loved that it diverged from the standard Star Wars fantasy genre, by beautifully blending in strong elements of the war movie genre in the vein of "Saving Private Ryan", "The Great Escape", etc.  One of the strengths was definitely the fact that it was very character based.  This movie was very well paced, and balanced itself wonderfully between the action, drama, and the humour.

The characters were complex, unique, relatable, and diverse.  All of the characters worked well together in terms of moving the story forward, and keeping you engaged with the movie on an emotional basis.  By the end of the movie, you are fully invested in the characters, and impacted by the events they're involved with.

I have to high props to the acting.  Just top tier acting put on display.  Felicity Jones as Jyn Erso was outstanding in the role.  You could believe that she was a jaded person concerned for herself first, and wanted to see her grow into a character that become bigger than their small world.  Diego Luna was great as Cassian Andor, the rebel fighter that has seen and done not so heroic deeds in the name of freedom.  He brought such complexity and depth to his character.  Donnie Yen and Jian Wen as Chirrut and Baze made a great team, and brought a lot of life and energy to their roles.  I really enjoyed Riz Ahmed as Bodhi- the Imperial pilot.  He was so understated with is character, but a joy to watch.

The film is also visually delightful.  The look and feel of the action, etc harkened back in many ways to the Original Trilogy.  Nothing super complex or fancy- but highly effective and engaging.  The action sequence on Scarif especially had a feeling of a beach storming scene from a traditional war movie in how it was shot and paced.  Just amazing.