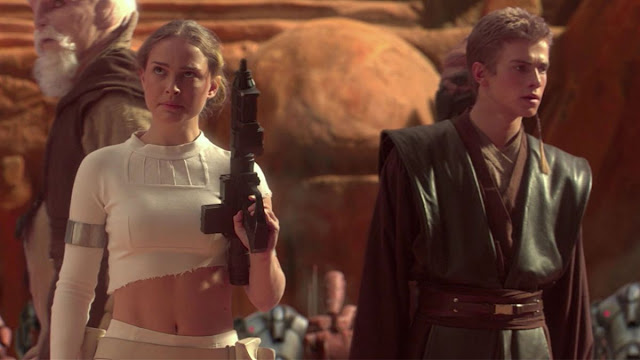 A long time ago, in a galaxy far away, I started a journey through the Star Wars franchise.  This week, we come to our second stop on the trip: 2002's "Episode Two: The Attack of the Clones"...

The Republic is crumbling.  A seperatist movement has begun, and planets are starting to rebel about the government.  After an assassination attempt on Queen Amidala's life, Obi-Wan and Anakin are tasked with investigating who's behind the attack.  Things get... complicated as Anakin reveals his true feelings for the Queen, and Obi-Wan tracks down a bounty hunter...

The plot for "Episode Two" is a nice- and very natural continuation of the threads created in the first movie.  It develops it while increasing the tension, suspense, and drama.  There is a nice amount of intrigue, and I was engaged by the plot developments as the movie went along.  The pace is interesting in that there are some pretty slow portions that lead into some fairly high octane action sequences.

The characters also get nicely developed in this instalment as well- though Padme, as she falls for Anakin becomes a bit weaker as a character- threatening to cross over into the stereotypical love interest/damsel type character.  In her defence, this could be in part to certain impressions I get from Anakin that I'll cover as well.

Obi-Wan gets a lot of development in this movie, and often out shines his protege in terms of being engaging and entertaining.  There have been cries from fans for an Obi-Wan stand alone movie- and I would absolutely see it!  He's just that interesting in this instalment of the prequel series.  He's a beautiful blend of humour, wisdom, action, charm, drama.  I'd go so far as to say that Obi-Wan is THE most well rounded and crafted character in "Episode Two".

And then there's Anakin Skywalker.  I'm sorry- but he comes off as a little entitled... and creepy in this movie.  His angst is over the top at times, and his tendency to ignore Padma's distancing when he expresses his feelings for her are a little... what's the word?  Oh... "rapey".  There's even one scene after Padme says, "no" that he smiles behind her back in a rather predatory way.  I couldn't help but feel by the end of the movie that he had used a Jedi mind trick to influence her feelings for him.  He seriously made me uncomfortable.

The acting was a bit better in "Episode Two" than in the first one.  The performer's interactions with the sets, etc were a lot smoother, and more believe able.  Things didn't feel so stilted and wooden.

Despite the... creepier aspects of this movie, It wasn't a bad experience over all.  I'm going to give it a high end "Bad".