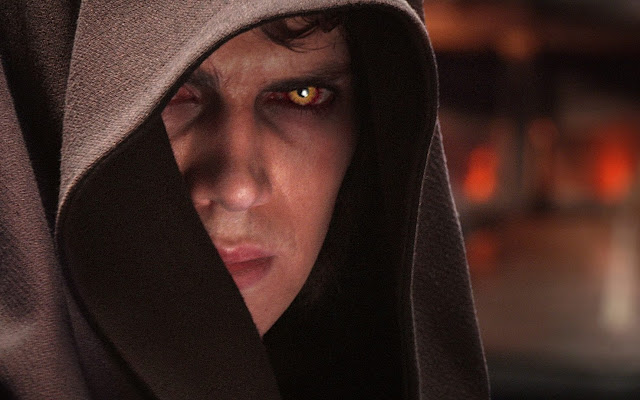 Battle calls again!  My orders are to charge into my next review!

It's a dark time for the Republic.  More and more planets are joining the Seperatists.  The Jedi are once again called upon to save everyone.

But the shadowy Sith manipulating events are about to reveal themselves... and get their revenge...

I'm going to come out shooting and say that of the prequels, "Revenge of the Sith" is the best of the lot.  Though there are still problems with it.  The story is pretty damn solid.  It's very operatic in nature, and much more emotionally impactful than the first two.  The pacing is also in some ways, much better as well, with a better balance between the action, dramatic, and romantic scenes.  I found it much easier to stay focused on the movie than I did with "Phantom Menace" and "Attack of the Clones".

The characters of Anakin and Obi-Wan are developed much more in this installment- with Anakin having less of a "stalker" feel to him this time.  Unfortunately, Pademe really gets the short end of the stick in terms of development.  In this movie, she's reduced to pretty much nothing more than a McGuffin and a prop for Anakin's arc.  She's there simple to be pregnant, and motivate Anakin's descent to the dark side.

As usual, the light sabre duels are amazing- especially the climatic battle between Anakin and Obi-Wan.  It's a great display of action and drama that I really enjoyed.

While it does have some flaws, they weren't enough to seriously detract from my overall enjoyment of the movie.  As the best of the prequels, I'm giving it a "Good".

It has come to my attention that I'd given "Attack of the Clones" a "Good".  This was accidental.  I'd meant to give it a "Bad".  I have gone back, and edited the original review to reflect this.