The Book Nook: "Necropolis: London and Its Dead" (Catharine Arnold) 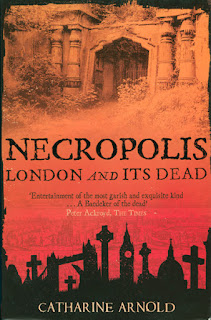 Sometimes, reality can be much more creepier and macabre than anything you find in a horror novel or movie...

I had a hard time putting this book down once I started reading it.  The style is easy to follow, and flows smoothly from one subject to another- almost like a conversation at times.  She covers such things as Daniel Dafoe's observations of the Plague Pits, and what was done with Plague victims when they died, the emergence of the body snatchers who supplied medical schools with cadavers (few questions asked), and the beginnings of the funeral industry.  Arnold meshes all of these things, and more into a cohesive and fascinating whole, weaving in stories of famous Londoners, and not so famous residents.

Using the question of WHERE to bury the dead as a starting point, Arnold then takes you on a grim journey into the evolution of the graveyards and burial places that we all know exist... but don't necessarily want to go.  This journey illustrates the changes in how people think about the dead- from fear of the dead corrupting the ground and spreading disease, to Sunday picnics amongst the gravestones; from simple holes in the ground to grand marble tombs; from grim proximity to abstract distance.

Throughout the book, she manages to carry the theme of burial and funeral practices without you really noticing that the real subject isn't so much about how the city government dealt with the question of the repose of the dead, as to how people in general treated the deceased.  She shows us the best and the worst of human nature in the stories she tells- about those that wanted death to be dignified, and those that robbed death of any dignity it may have had.

Altogether, a thoroughly interesting read, that shows that sometimes truth is a little creepier than fiction.  I'm placing "Necropolis: London and Its Dead" in "The Good".


Starting next week, "The Book Nook" will be moving to Tuesdays!