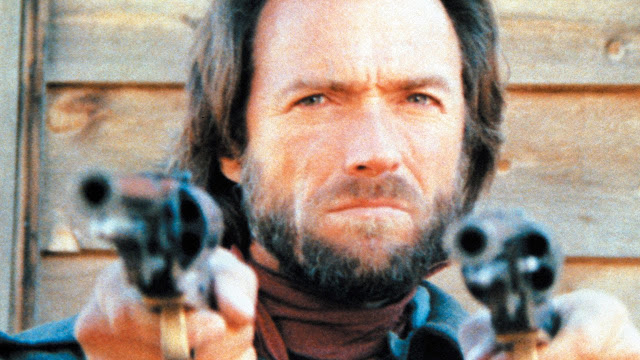 The Outlaw Josey Wales was one of my dad's favourite movies. So I saw it a lot growing up. Every time it was on TV, he and I ended up watching it. By default, and gladly so, it's become one of my favourite movies as well.

Josey Wales takes Clint Eastwood's The Man with No Name and deposits him in a post-Civil War epic about revenge and redemption. In many ways, it covers similar themes as Eastwood's Unforgiven. This movie is more thoughtful and intelligent than I remember it being. Then again, as a kid, I was mostly interested in the gunfights.

There are gunfights aplenty in The Outlaw Josey Wales, but there's a greater depth to the film, and the character, as well. This movie is as much about a group of individuals coming together to merge their destinies as they survive in the Old West. The ironic thing is Josey Wales, a violent loner, becomes their leader and father figure. It's an interesting dynamic, and plays very well, even some 44 years after the movie came out.

Eastwood brings a subtle depth to Wales. Yes, he does that thing he does best, but there's a lot going on in his eyes, his mannerisms, and the few words he says. More than most critics ever gave him credit for at the time. A scene between Wales and a First Nations chief named 10 Bears resonates strongly with current world racial affairs, and delivers a powerful message about how people from different cultures can get along.

Everything you want from an Eastwood Western is here, and a whole lot more. I'd forgotten how damn good Chief Dan George is in this, bringing dignity and humour to his aging Aboriginal. His and Eastwood's banter is spot on.

And yes, the gunfights are still awesome.

The Outlaw Josey Wales is a classic, and damn Good!