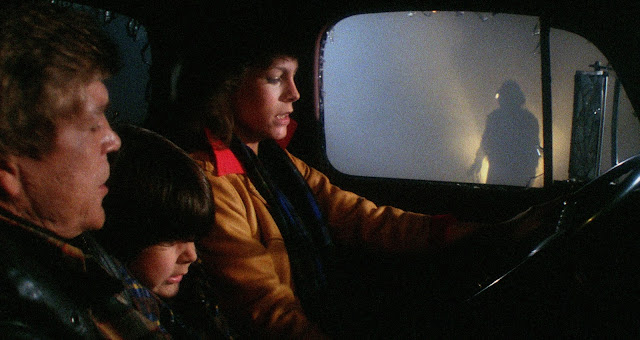 The Fog wasn't the first horror movie I'd ever seen, but it was one of the first that truly lingered in my mind. I can credit Mike S with that, as he'd seen it multiple times, and kept telling me how scary it was... and that every time he watched it, a fog would roll in.

Suffice to say, he was willing to put his money where his mouth was, and invited me over to watch it at his dad's place one night. We had our pop and junk food, and were ready to ride the scare train!

Well, there was no fog bank that night, but it was a scary viewing experience. And instantly became a favourite of mine. I watch The Fog once a year, usually while staying at a cabin on a lake, and it's one of the few movies that, unlike me, never gets old.

There's so much to enjoy, from the charming performances by Jamie Lee Curtis, Tom Atkins and Adrienne Barbeau to the breezy dialogue to John Carpenter's masterful direction. And the story is the stuff of tales told around the campfire, which makes the opening monologue by John Houseman all the better.

I appreciate that Carpenter didn't resort to a lot of special effects to bring his ghosts to life. These are guys in costumes, and that makes them all the more... believable. And scarier! This is something James Wan would adopt with his horror movies some two decades later.

The Fog is a bonafide horror classic. Hell, I'd call it a classic no matter the genre. And it's still a Good, even after all these years.