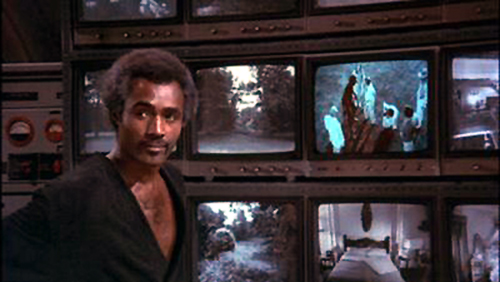 The Beast Must Die is the first horror movie I ever watched. I saw it on a Sunday afternoon. My dad let a buddy of mine and I tune in. For years after, the only thing I remembered about it is a rich guy invited a group of people to his estate, and one of them was a werewolf. Naturally, he wanted to kill it.

The movie terrified me. I couldn't sleep for weeks after, convinced a werewolf was under my bed or hiding in my closet. I think I was eight at the time.

My wife found a DVD copy of the movie and gave it to me for my birthday. I hadn't seen it in like 40 years and, watching it again, not one chill was generated. Nor did I expect it.

But this is still a fun bit of nostalgia. Made at the height of the Blaxploitation era, Beast features Calvin Lockhart as the lead, and it's refreshing to see a black man as the hero, especially in light of current world affairs. And he's pretty good. I sure wouldn't want to mess with him!

My eight-year-old self had no idea Peter Cushing was in this, and it's a delight to watch the veteran Hammer actor at work. Ditto such acting legends as Michael Gambon, Anton Diffring and Charles Gray.

The Beast is a made-up dog, but it still works. And there are moment where I can see my young self getting scared, especially a sequence where the werewolf leaps through a window at Diffring. Director Paul Annett did what he could with early 70s low-budget moviemaking, and he pulled it off.

This is a fun retro watch, and I'm glad I finally own it. It's a Good for nostalgia sake.