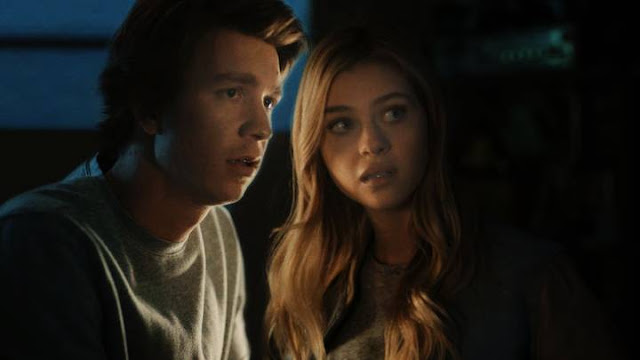 Our House is a decent hidden gem I happened across while seeking out paranormal programming on Netflix. The poster looked cool, and the synopsis piqued my interest enough that I decided to give it a watch.

Although far from perfect, director Anthony Scott Burns and screenwriter Nathan Parker opt to focus on a family impacted by the death of their parents rather than the spooky goings on. Not that those are completely abandoned. But by investing us in the characters, we're willing to accept the supernatural elements once they come into play.

The story follows a science wiz named Ethan (Thomas Mann) who must leave behind college and his girlfriend (Nicola Peltz) to care for his younger brother and sister after their parents are killed in a car accident. By day he juggles the responsibilities of raising two kids; by night he tries to complete an invention he hopes will change the world. But this device, which can generate wireless electricity, has the side effect of awakening dead souls. Naturally, they aren't all friendly...

A lot of words there for a pretty straight-ahead flick, but it's the family dynamic and study of grief I enjoyed most about Our House. The ghosts slowly come into play, and there's the usual dark-history-of-the-house kinda stuff. The horror elements offer nothing new, although Burns and Parker do craft some nice tension toward the end.

I watched Our House late at night, which it's best suited for. This is an after-the-pub kind of flick, and works well on that level. I'm giving it a Good, and will revisit it during the Halloween season.